Dorothy Rowntree was the first woman to graduate with a degree in Engineering from the University of Glasgow. Born on 16th January 1903 in Glasgow. Her father was Robert Stanley Rowntree (1870-1946). In the census of 1891 he was working as a ship’s draughtsman in Wallsend on Tyne, but by the time that Dorothy was starting at the University of Glasgow he was a Surveyor for Lloyds Register of Shipping and seems to have worked partly in Glasgow and partly in Genoa at this period. © Nina Baker

Rowntree studied at the University of Glasgow and the Royal Technical College between 1922-26.
The Royal Technical College, now part of the University of Strathclyde, provided a lot of the practical courses for the University of Glasgow’s engineering students and also had, at that time, a unique early ship simulator, known as the “Land ship” on its roof, for teaching the use and correction of compasses. She graduated from the University of Glasgow with a BSc Engineering Naval Architecture, on 24th April 1926. She was the University’s first woman to graduate with a BSc in engineering.
Sadly, she did not make much professional use of her very fine degree,  which must have required considerable perseverance and determination to complete, in what was probably at that time a hostile and male atmosphere. She seems to have worked in her father’s marine surveying office for a couple of years but then went to Beirut, because her sister was already living there, and got a job as Secretary to President Bayard of the American University of Beirut.
She met her husband Norman Joly in Beirut, and they later lived in Palestine, returning to the UK in 1947. They had two sons. She chose to raise a family in a difficult part of the world, which she got to know very well, through war and insurrection. She and her husband were described by their family as having “left behind a memory of two people who, with sympathy and hard work, became an example to a community of mixed faiths and nationalities”. © Nina Baker 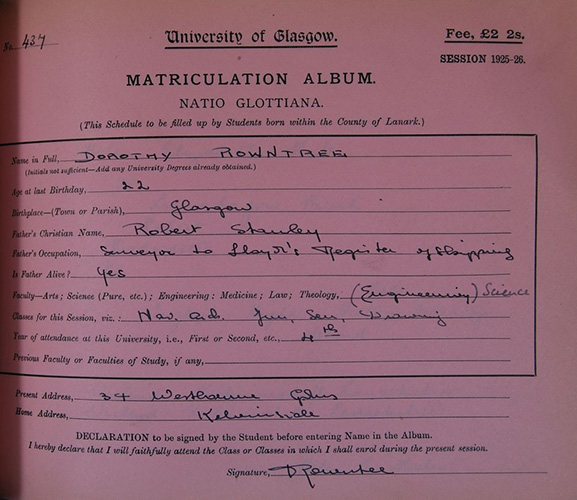 Find out more about Dorothy Rowntree