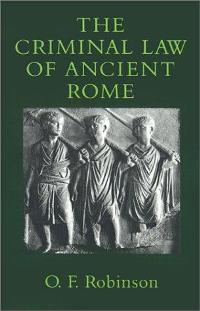 The Criminal Law of Ancient Rome

This study of the ancient Roman legal system starts by establishing the framework within which the law operated, and the nature of criminality. It then examines the criminal law under Sulla (82-81 BC), which saw the establishment of a system of standing jury courts. The text groups offences into five chapters: crimes committed for gain, crimes involving violence, sexual offences, offences against the state, and offences against the due ordering of society and the state.