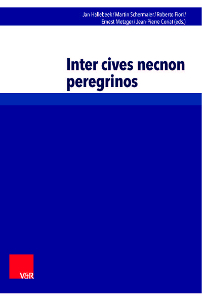 Via Amazon.de.  Via the Publisher.

The contributions to this volume are concerned with the Roman law of antiquity in its broadest sense, covering both private and public law from the Roman Republic to the Byzantine era, including legal papyrology. They also examine the reception of Roman law in Western Europe and its colonies (specifically the Dutch East Indies) from the Middle Ages to the promulgation of the German Bürgerliche Gesetzbuch in 1900. They reflect the wide interests of Professor Boudewijn Sirks, whom the volume honours on the occasion of his retirement and whose work and career have transcended frontiers and nations.