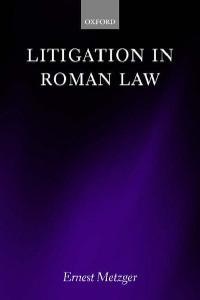 This is a technical work that examines the machinery of Roman civil justice in the classical law.  The study of Roman civil procedure regularly presents the researcher with two hurdles to overcome: the scarcity of evidence, and the subtle discrepancies between ‘the law’ and ‘the way things were actually done’.  The law was set out in a series of provisions in the Praetor’s edict and in a handful of statutes.  The actual behaviour of litigants is found in literary sources, such as Cicero, and in the various corpora of documents that have survived from antiquity.  This book draws together these sources to produce a picture of Roman litigation.

The law of procedure was concentrated in the proceedings and private negotiations that took place in advance of the trial itself.  (The trial, in contrast, was relatively unregulated by ‘tribunal rules’, though the judge himself was directed by certain rules.)  This book focusses on this first stage.  Traditional accounts of the first stage assume a good deal of cooperation by the litigants, and indeed paint a very orderly picture of proceedings, in which events pass from the commencement of the suit to trial in a short space of time.  The true picture is less attractive: absent magistrates, bickering between litigants, and delays.

'[A]n illuminating guide to how the field works at its best.' (Classical Philology)

'[A] fundamental contribution to the subject of Roman litigation by a scholar who is clearly one of the foremost experts in the field.' (Edinburgh Law Review)

'[T[he author's very full and detailed account of the available sources and his extremely comprehensive apparatus of references to the voluminous recent literature will render this monograph very useful to any reader curious to know how Romans actually litigated.' (The Journal of Legal History)