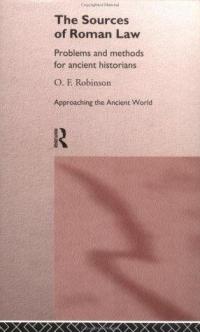 The Sources of Roman Law: Problems and Methods for Ancient Historians

The notion and understanding of law penetrated society in Ancient Rome to a degree unparalleled in modern times. The poet Juvenal, for instance, described the virtuous man as a good soldier, faithful guardian, incorruptible judge and honest witness.

This book is concerned with four central questions: Who made the law? Where did a Roman go to discover what the law was? How has the law survived to be known to us today? And what procedures were there for putting the law into effect? In The Sources of Roman Law, the origins of law and their relative weight are described in the light of developing Roman history. This is a topic that appeals to a wide range of readers: the law student will find illumination for the study of the substantive law; the student of history will be guided into an appreciation of what Roman law means as well as its value for the understanding and interpretation of Roman history. Both will find invaluable the description of how the sources have survived to inform our legal system and pose their problems for us.