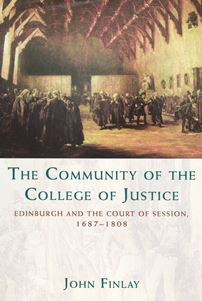 The Community of the College of Justice

How important can a court and its members be in influencing the development of a country? In Scotland’s case, the answer is surprising. The remarkable metamorphosis of eighteenth-century Edinburgh, from crisis conditions in the 1690s through the Union to the intellectual heights of Enlightenment and the development of the spectacular New Town, owed a great deal to those who spent their professional lives working in the Court of Session where they were members of the unique institution known as the College of Justice. James Boswell, Lord Kames, Henry Dundas and Walter Scott are just some of those who emerged from the College to influence Scotland’s place in Europe. This study investigates the important role of College members in the cultural and economic flowering of Scotland as a whole, and Edinburgh in particular, revealing a major contribution which has marked the physical and mental landscape to the present day.