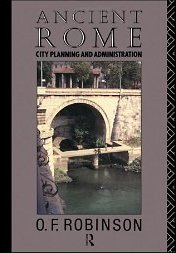 The population of ancient Rome at its peak exceeded that of any previous western city, or any that came after it until the Industrial Revolution. The requirements for its running - to keep the inhabitants fed and provided with water, drainage and entertainment, to enable the people to move about freely and in relative safety, to facilitate a reasonable harmony with their neighbours meant that a pragmatic system of administrative law was needed. This book describes the legal aspects of urbanism, of the functioning of Rome as a city.

The author begins by introducing the purely physical aspect of Rome - its populations and boundaries. An overview of town planning is followed by an in-depth treatment of building and controls, public works, streets and traffic. The Tiber, the main river in Rome, was central to life in the city. Its bridges and sewers, its employment as a transport system, its relationship to the water supply, and its other uses are discussed in detail. This provides the background for an analysis of public health and safety. Additionally, the book focuses on services such as food distribution, entertainment such as the theatre and gladiatorial games, and the forces of law and order.

The book contains a large fold-out map of Ancient Rome, especially drawn for this volume.