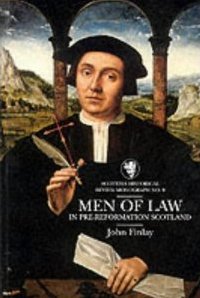 Men of Law in Pre-Reformation Scotland

This is a study of lawyers in sixteenth-century Scotland. It is based on a range of primary sources with, at its centre, an examination of the contemporary acts of the lords of council covering over half a century. The focus is on a key generation of advocates who were appointed ‘general procurators’ of the new College of Justice when it was founded by James V in 1532. These lawyers, who largely learned their law on the continent before returning home to gain experience of legal practice, were the forerunners of the Faculty of Advocates. They form a vital link between the development of Scots law in the sixteenth century and the rules and practices of the ius commune. In their backgrounds, politics and cultural lives can be identified traits that were to become developing themes in the Scottish legal profession.

This work uses family papers and other sources to buttress findings taken from the study of procedural records in order to uncover the backgrounds and careers of these lawyers. In doing so, it illuminates the procedural rules by which they operated and the significance to social and family historians of the contemporary court records. The defence by lawyers of their common interests in practising at the bar hints at the later development of the Faculty of Advocates. Particular evidence of the interaction of lawyers with their clients presents details of the incomes which allowed them to purchase estates and, in some cases, to found or perpetuate legal dynasties. As well as their involvement in the administration of justice to private parties, there is much focus on the role of advocates in the development of contemporary royal government in Scotland. In particular, attention is paid to the growing importance of the crown advocate (the office now known as lord advocate).

This is the only extended study of the Scottish bar in the sixteenth century. It was intended to present a picture of the Scottish legal profession at the earliest date at which there was sufficient evidence upon which to base a monograph. While it links clearly to earlier evidence going back into the fifteenth century, it also provides a basis for looking forward to the dramatic changes and expansion in the legal profession in Scotland over succeeding generations after the Reformation in 1560.

‘Men of Law is a welcome addition to the Scottish Historical Review Monograph series as well as to Scots legal history. Its scholarship is impressive and inclusive. To judge from Men of Law, John Finlay promises to contribute much to legal history.’ – Albion.

‘Dr Finlay’s pioneering study may well be called a valuable contribution to our knowledge of the history of courts, men of law and procedure in Europe.’ – Tijdschrift voor Rechtsgeschiedenis

Some of the themes in this work have also been explored further by the same author in the following publications: