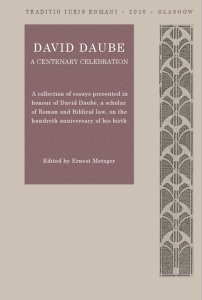 The essays in this volume were presented in honour of David Daube, a scholar of Roman and biblical law, on the hundredth anniversary of his birth. DAVID CAREY MILLER relates the events leading up to the centenary celebration. HECTOR L. MACQUEEN describes the decades-long friendship between Daube and T. B. Smith, professor in Aberdeen and Edinburgh. ROBERT A. SEGAL analyses Daube's defence of causation in biblical law as 'sophisticated' rather than 'primitive'. CALUM CARMICHAEL discusses the ritual of the red heifer in Numbers 19 and its relation to Jacob's 'red, red dish'. BERNARD JACKSON discusses the parable of the prodigal son, the legal ambiguities that attend the arrival of the returning son, and the significance of these ambiguities, especially to the relationship between historic Israel and the new church. WILLIAM M. GORDON recalls his time as an undergraduate attending Daube's classes in Roman law. ERNEST METZGER discusses Daube's lectures on the Roman law of sale, preserved in typescript. ALAN WATSON recalls his time as Daube's doctoral student, and later as his colleague. JONATHAN M. DAUBE gives a lively and personal account of his father.