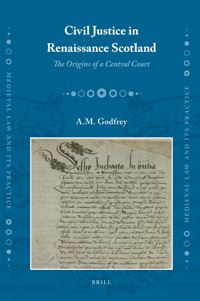 Civil Justice in Renaissance Scotland: The Origins of a Central Court

This book offers a fundamental reassessment of the origins of a central court in Scotland. It examines the early judicial role of Parliament, the development of “the Session” in the fifteenth century as a judicial sitting of the King’s Council, and its reconstitution as the College of Justice in 1532. Drawing on new archival research into jurisdictional change, litigation and dispute settlement, the book breaks with established interpretations and argues for the overriding significance of the foundation of the College of Justice as a supreme central court administering civil justice. This signalled a fundamental transformation in the medieval legal order of Scotland, reflecting a European pattern in which new courts of justice developed out of the jurisdiction of royal councils.

“A.M. Godfrey has written a magnificent, multilayered study with wide-ranging implications for legal history and for an understanding of sixteenth-century Scotland. Though the central pivot of his volume is the foundation of the College of Justice in 1532, this book also offers answers to the broad questions of what constituted civil justice during the Renaissance period and what role a central court had to play in changing the legal culture of early modern Scotland.” (Law and History Review)

“An important achievement in its own right, Godfrey’s volume points the way forward. Scholarly in treatment, accurate in detail, thoughtful in realisation and well informed by the literature on England and the continent alike, it is broad in vision and bold in argument. It makes a valuable contribution to our understanding not only of Scottish but also of British and European history in an era of profound legal change.” (English Historical Review)

“In a bold and thought provoking book Mark Godfrey offers a thorough reassessment of the foundation of the College and the significance of the legislation of 1532 in the evolution of a system of centralised justice in the northern kingdom…. The result is a meticulously detailed study of the nature of law and justice in early modern Scotland and an altogether compelling account of the history of a central civil court civil with supreme jurisdiction…. Not least among an impressive series of skills that Godfrey demonstrates is a mastery of a body of record material that many a scholar has found impenetrable and unrewarding and a rare ability to present the varied strands of a complex argument in clear language. This book deserves to become obligatory reading for all students and scholars interested in the history of the law and development of the early modern state in Scotland, Britain and Europe.” (Scottish Historical Review)

“Several years ago, Dr Godfrey observed that Scottish legal history has enjoyed a renaissance over the past few decades. As a result, our perceptions of the legal past have been transformed and enriched by several scholars, many of whom have studied the late medieval and early modern periods. However, until recently the discussion was hindered due to considerable uncertainty amongst historians concerning the significance of the foundation in 1532 of the College of Justice as a supreme court administering civil matters in Scotland. This problem has now been removed by Godfrey’s brilliant study…. Anyone who wishes to write about any sixteenth century sources of Scots law – such as Craig’s Ius Feudale, Skene’s edition of Regiam Majestatem, Balfour’s Practicks or Sinclair’s Practicks – should read Chapters Four and Five of Godfrey’s book first. This will enable such modern writers to comprehend the legal debates referred to in the texts. Those who use these texts primarily when discussing current doctrinal Scots Private law will find reading Godfrey’s work invaluable in this regard….. Godfrey has produced the definitive study of the development of the early modern Session, which has both resolved many academic debates and provided an invaluable foundation for future historical research.” (Edinburgh Law Review)