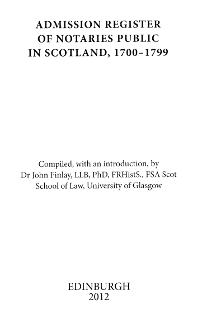 These volumes record the more than 3000 notaries public admitted to practise in Scotland during the period 1700 to 1799. Based on the central admission register, the entries are supplemented by information drawn from a range of other sources both published and in manuscript. They are contextualised by an extensive introduction which considers the position of notaries in eighteenth century Scotland; the process of admission; the role of the clerk to the admission of notaries and the lords of session and what the pattern of admission tells us about contemporary legal practice.