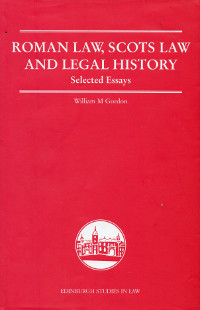 This book is a selection of articles published by the author in the course of his career, most of which was spent as Douglas Professor of Civil Law and latterly as professorial research fellow ar Glasgow University. Some of these articles deal with the never-ending problems of the interpretation of the Roman sources in their original context, problems which are not without resonances in modern law. Others are concerned with what was made of the rich sources of legal wisdom to be found in the Roman texts by later jurists, and the influence that the Civil law as so understood, along with Canon law, had on the development of Scots law. Individual studies are complemented by more general surveys, including a comparison with the position in England. Another group of articles deals more directly with issues in Scottish legal history, Balfour's Practicks, the activities of Bell as a law commissioner and the sources of Stair. A final group considers more general issues. The opportunity has been taken to make some revisions of and updates to the original texts and there are cross-references to relevant studies which have not been reproduced. A bibliography of the author's publications appears in the final chapter.

'[The essays] are impeccably crafted, characterised by conciseness and lucidity in expression, demonstrate excellent sense and judgment in the handling of complex issues, and, perhaps above all, reveal a mastery of the civilian sources.' (Edinburgh Law Review)