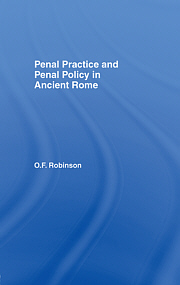 Via Amazon UK.  Via the publisher.

Using Roman literary and legal sources, this book assesses Roman penal policy through an in-depth examination of six high-profile criminal cases, ranging from the Bacchanalian trials in 186 BC to the trials for treason and magic in the fourth century. Identifying Roman attitudes to crime and punishment, this book brings out contrasts and developments in those attitudes.

The author examines Roman criminal legislation (both that laid down by Justinian and that codified and confirmed by him) as well as Roman attitudes, both juristic and philosophical, to the purposes of punishment, including deterrence, retribution, reform, protection of the public and how they were modified over time. The author also discusses arguments for fixed as against flexible penalties, and the changes made in the actual punishments and in those to whom they were applied.