World Refugee Day today will be marked in Westminster with an exhibition of ‘Tears of Gold’, a series of refugee portraits by artist and UofG PhD Hannah Rose Thomas.

‘Tears of Gold’ is an acclaimed series of portraits of women from across the world profiles the stories, suffering and search for justice that define just a handful of those millions forced from their homes worldwide.

As part of her week long UK parliament exhibition, sponsored by UNHCR UK, the UN Refugee Agency, and Rehman Chishti MP, Hannah is unveiling a new portrait of Ukrainian refugees Maria and her mother Nadiia from Kyiv. 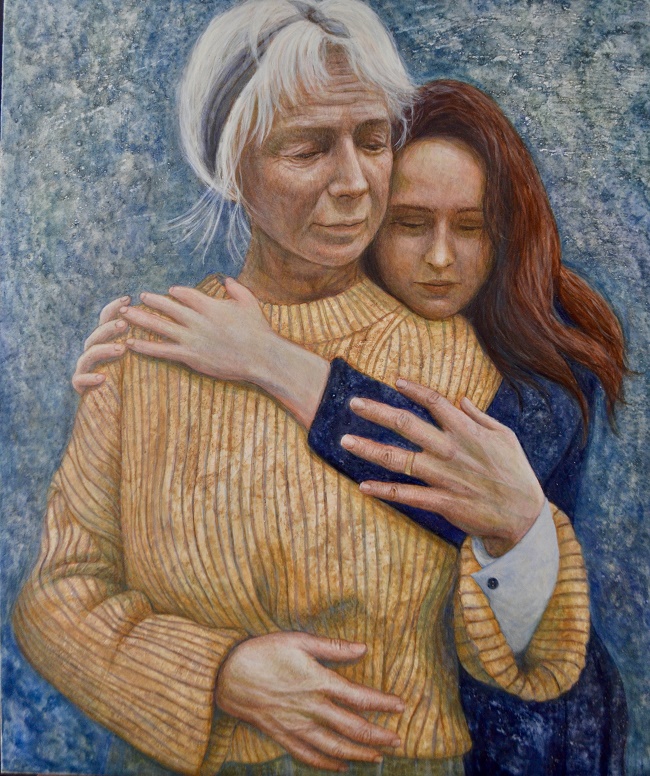 Maria and her mother Nadiia were living in Kyiv when the war began on February 24 2022. Maria awoke to her mother screaming: “Masha, wake up! The war has started. They are bombing Borispol.”

Initially they experienced denial and disbelief. After 12 sleepless days haunted by fear, hiding in the basement as a bomb shelter, they decided to leave the country to seek refuge in the UK.

Since the onset of the Russian invasion, one-third of Ukrainians have been forced from their homes. It is the largest human displacement crisis in the world today.

The UK government announced an unprecedented scheme called ‘Homes for Ukraine’, that allows communities, private sponsors or local authorities to sponsor people to come to the UK.

Hannah, is studying for her PhD with the UNESCO Refugee Integration through Language and Arts team based at the School of Education, said: "We must appeal for the dignified and humane treatment of all those living in and through displacement and who arrive here seeking sanctuary. There is an urgent need to keep the borders of our hearts open to those who are forced to flee conflict, persecution, and human rights abuses.

"As Maria expresses beautifully: ‘It does not matter what nationality you are, what matters is what you are doing in this present moment. For humanity has no geography and kindness has no nationality’." 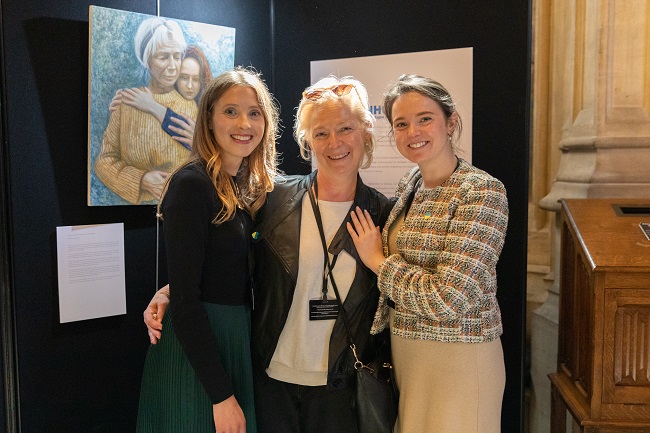 This year, for the first time on record, the number of people forced to flee conflict and persecution has surpassed 100 million. In the words of UN High Commissioner for Refugees, Filippo Grandi: “It’s a record that should never have been set”.

As well as Hannah's week-long exhibition, there will be a panel discussion on Wednesday to reflect on how the international community and the UK in particular should respond to the global refugee crises.

Among those speaking at Wednesday's event will be Hannah; Vicky Tennant, UNHCR’s Representative to the UK; Ferozan, a former female judge from Afghanistan who features in the exhibition and Baroness Sarah Ludford, sponsor of the Refugees (Family Reunion) Bill.

Among the speakers at Wednesday's discussion will be Hannah Rose Thomas; Vicky Tennant, UNHCR’s Representative to the UK; Ferozan, a former female judge from Afghanistan who features in the exhibition and Baroness Sarah Ludford, sponsor of the Refugees (Family Reunion) Bill.

Lord Alf Dubs, who arrived in the UK in 1939 as a six-year-old refugee fleeing the persecution of Jews in Nazi-occupied Czechoslovakia, and is the co-chair of the All-Party Parliamentary Group on Refugees was due to chair Wednesday's event put has had to pull out due to Covid.

About ‘Tears of Gold’

Compiled over 10 years, 'Tears of Gold' highlights the stories of women who have survived conflict and persecution across the world, from Syria to Nigeria, Myanmar to Iraq.

Hannah Thomas' most recent portraits are of female judges from Afghanistan and Ukrainian families who have sought refuge here in the UK.

Her portraits are a visual testimony not only of war and injustice but also of humanity, dignity, and resilience. Through her paintings, Hannah seeks to give voice to the voiceless, lionise the isolated and prescribe dignity to the persecuted and forcibly displaced