The University has hosted a symposium on capacity strengthening in Africa, with key contributions from the African Research Universities Alliance (ARUA) as well as other Scottish universities, government bodies, founders and network.

A Memorandum of Understanding was signed by the Principal, Professor Sir Anton Muscatelli, and Professor Ernest Aryeetey, Secretary General of ARUA. 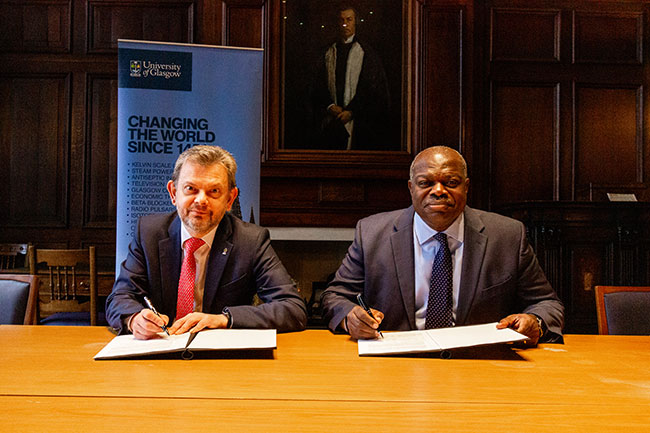 The University of Glasgow is very proud of the work that it does and the strong links that it has in Africa and recognises the importance of capacity strengthening in the region. This symposium provided an opportunity not only to showcase some of the fantastic work that Glasgow is leading on, but also to explore what more can be done in this area.

Vice-Principal, External Relations, Rachel Sandison said: “I think this is a really important time for Glasgow to lead the conversation in terms of what the key priorities and obstacles are for capacity strengthening, how higher education providers, networks, governments and funders play a role in that, and what the scope is for knowledge exchange and capacity strengthening – not only in terms of academic work but also in professional areas within higher education provision.”

The University hopes that the symposium will lead to increased collaboration between members of ARUA and Scottish universities, and there is also potential for enhanced co-ordination between Scottish universities on their programmes in Africa. Professor Paul Garside, Dean of Global Engagement for the Middle East and Africa, and colleagues who are leading on the university’s extensive work in Africa saw the event as an opportunity for meaningful discussion about the key components of capacity building and hearing from the perspectives of key representatives from African universities.