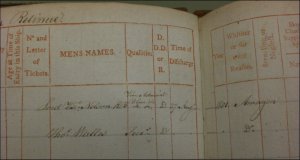 Captain John Gore commissioned the gun frigate Medusa on 25th April 1801 because a French invasion was thought to be imminent.  Nelson (see image, right), with the aim of bombarding Boulogne, sailed in the Medusa from 2-27 August 1801 after which he transferred to the Amazon.  Andrew Service’s logbook begins on 23 March 1802, after Nelson had left the frigate. View larger image

The Napoleonic Wars and the Medusa

The Napoleonic Wars, against which Andrew Service’s account is set, took place between 1792 and 1815. From 1801, with the rise of Napoleon’s power, the original aims of the wars changed from a focus on revolution within France to a desire for more territory. During the Napoleonic Wars the number of men in the British Navy increased nearly ten-fold from 16,000 to 140,000.

In October 1804 the British received information that four Spanish ships, Le Fama, Medea, Mercedes and Le Clara, carrying money to the French, were expected to arrive at Cadiz. On 5 October, off Cape Santa Maria, the ships were sighted by the British frigates; Medusa, Indefatigable, Lively, and Amphion. After no response to the warning shots and a request to heave-to by the British, the Indefatigable closed with the Spanish Medea. Medea gave the Indefatigable a broadside while Mercedes attacked the Amphion. Mercedes unexpectedly exploded.  Medea and Clara surrendered to the British while the other Spanish ship, Le Fama, was also captured after an attempt to escape. The British casualties were two deaths and seven wounded while the Spanish losses were much higher. This incident contributed to Spain declaring war on Britain on 12 December 1804.

The next major historical event in which Medusa played a part was the attempt by the British to capture Buenos Aires in Argentina. The English Rear Admiral Sir Charles Stirling, the commander of the Rio de la Plata squadron, decided to capture Montevideo as a first move. On 22 January 1806 it was observed from the Medusa that the ‘enemy gun boats were firing on our Army.’ Bouverie, the commanding officer of the Medusa, keep up a ‘constant fire’ on the offenders. By 3 February 1806 the British troops stormed and captured the city. Although they were successful, shallow water prevented the warships supporting the assault. A low supply of powder and shot caused the fleet, including the Medusa, to remain static and await support before taking further action.

Lieutenant General John Whitlock took control of the British fleet on 15 June 1806. Whitlock landed troops on 28 June and began an attack on Buenos Aires on 5 July. His troops were picked off by snipers as they moved into the city with shallow water again preventing the ships from helping the assault. Whitlock’s attack was unsuccessful, losing over 2,500 men either as dead or captives. On 16 July 1806 the British were forced to surrender to the Spanish and left Montevideo on 28 July and the city was returned to the Spanish on 9 September 1806.

In November 1807 Medusa returned home to England to refit before being deployed in home waters. On 14 January 1810 the Medusa captured the privateer L’Hirondelle. The next noted engagement was with the French store ship Dorade on 4 June 1812. In 1813 the Medusa was paid off at Plymouth and turned into a hospital ship before being broken up in 1816.

For further information (or if you have some suggestions regarding the text of the logbook) about the On Board HMS Medusa exhibition or if you would like permission to use the images and text accompanying this exhibition, please contact us at enquiries@archives.gla.ac.uk in the first instance.