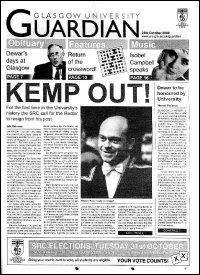 The newspaper has acted as a training ground for some of the UK’s most influential journalists and politicians, and the archive contains contributions from former students including Donald Dewar, John Smith, Andrew Neil, William Boyd, Iain Martin and Sir Neil MacCormick. The archive also provides a rich record of student life across 75 years, chronicling stories including the social service campaign of the 1930s, the protest marches of the late 1960s, the campaign to increase student grants in the early 1970s and anti-apartheid marches in the 1980s.

The archive is available at www.gla.ac.uk/services/archives/guardian.