Guide to the University of Glasgow Blackhouse Charters, 1304 to 1717 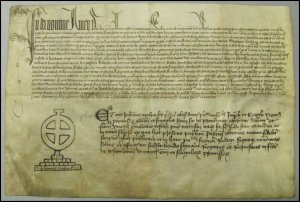 The Blackhouse charters date back to 1304, making them the oldest records held by the University of Glasgow.  Of national and international significance, they recount the expansion and relocation of the University over the centuries through acts of transfer of property, settlements of court, donations, and royal grants.

The main group of charters, and also the oldest, relate to the properties of pre-Reformation religious orders of the city of Glasgow, the most important of which being the Dominican friars or ‘Black Friars’. They possessed many lands and buildings in the city, and like every ecclesiastical institution they carefully kept their deeds and charters to prove their rights to their lands and their privileges. The vicars of the choir also have an important place in the collection, as the histories of the Cathedral of Glasgow and of the University were originally closely linked with each other.

Following these gifts, the University was able to expand and flourish during the 17th century. The rest of the collection is mostly composed of more acts of transfer of land or revenue, this time in the name of the University itself, and of donations by important people such as Oliver Cromwell and Archbishop Leighton.

Having been originally numbered and catalogued in 1712 by Robert Alexander of Blackhouse, they have since been known as the ‘Blackhouse Charters’ but occasionally also as the ‘Blackfriars Charters’. As well as a source for the history of the University, the collection gives a great insight into Glasgow’s medieval past as it contains some of the earliest references to named plots and identifiable houses within Glasgow as well as some of the earliest references to named people in the west of Scotland.

They are continuously numbered from 1 to 497 within 21 categories:

The charters and the 1712 Blackhouse inventory (Ref GUA 26674 Clerk's Press 60) are available for consultation in our searchroom. Photocopying is not possible as this would cause excessive damage. Photography is allowed.

The Blackhouse Charters catalogue (38 pages, 759kb, pdf) can be downloaded in pdf format.

A new, more complete catalogue is now available online.  You can explore it here.  There is also a new Flickr set available. 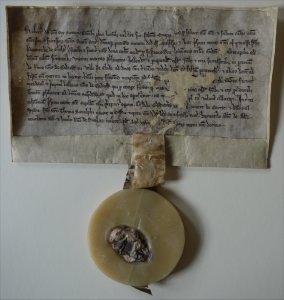 Printed texts of about one-third of the documents have been traced and are in four books available in the Searchroom or in the University Library: