In 1761, Semion Yefimovich Desnitsky and Ivan Andreyevich Tretyakov, the first Russian students to study at any British University, arrived in Glasgow to attend the classes of Adam Smith, the pre-eminent economist and philosopher of the Scottish Enlightenment, who held the chair of Moral Philosophy and lectured on rhetoric and belles-lettres, ethics and jurisprudence.

Having studied at the University of Moscow, they were sent abroad by the Empress Elizabeth to complete their education.  They both had financial problems while at Glasgow University as their allowances from the Russian authorities arrived irregularly and in 1762 they had to ask for a loan of £40 from the University Senate which they repaid a few months late. 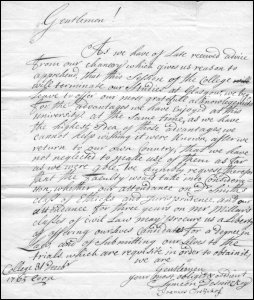 Desnitsky and Tretyakov both received a master of arts degree respectively and continued in their studies for the degree of doctor of law which they received in 1767.  They returned to Russia and in 1768 and became professors of Law at Moscow University, the first Russians to hold chairs of law in Russia’s first University.

This letter was sent to the members of Senate of the University of Glasgow from Semion Desnitsky and Ivan Tretyakov offering themselves as candidates for the “trials”, the oral examination required prior to the awarding of a degree, 31st December 1765.