By air: from Glasgow Airport, the campus is about 40 mins taxi ride, costing approximately £30. There is an airport coach (First Bus No. 77 and Glasgow Airport Express 500)  which connects the airport to Buchanan Street bus station in Glasgow City Centre, from which the campus is a short bus, underground or taxi journey away. The airport bus costs £8 (https://www.firstgroup.com/greater-glasgow/routes-and-maps/glasgow-airport-express).  There is more detailed information at the following url: maps and travel

Underground: the Glasgow Underground (the 3rd oldest in the world, opened in 1896) is known as the subway, denoted by a large orange “S”. It offers a rapid, simple connection in a single ring between the city centre and the West End (and multiple other points), where the University is located (the nearest subway station is Hillhead). A single journey (to anywhere on the circuit) costs £1.70, and is valid only on the day that it is bought. There are multi-journey tickets available (http://www.spt.co.uk/subway/tickets/ ).

Rail: Glasgow Central Station has connections with all mainline stations to the South, including London Euston. Typical travel times are: London, 5 hours; Birmingham, 4 hours 20 mins; Manchester, 3 hours 20 mins. Services to the North and East of Glasgow are based in Queen Street Station, a short distance from Central. There are many fast trains to Edinburgh from Queen Street, about 40 minutes journey time. Queen Street and Central are a short distance from the Subway station Buchanan Street (Central is also close to St Enochs).The closest rail station to the campus is Partick (shown on the map), offering rail services to the city centre, and to the countryside all around, including coastal areas.

Taxi: Taxis are generally plentiful in the West End, and not too expensive. There is a taxi-stance at Hillhead Underground, close to the conference site. A taxi to Glasgow International Airport takes about half an hour.

Bus: there are extensive bus services close to the campus, connecting to the city centre and beyond. Main bus routes are Byres Road, Great Western Road and Dumbarton Road. Many buses also travel along University Avenue, where the campus is located (http://www.spt.co.uk/)

Bike: getting around Glasgow can be done by bicycle – nextbike operate 500 bikes and 53 stations across the city, where you can collect a bike for short term use, and drop it off at convenient locations. See https://www.nextbike.co.uk/en/glasgow/ for details. Campus Map 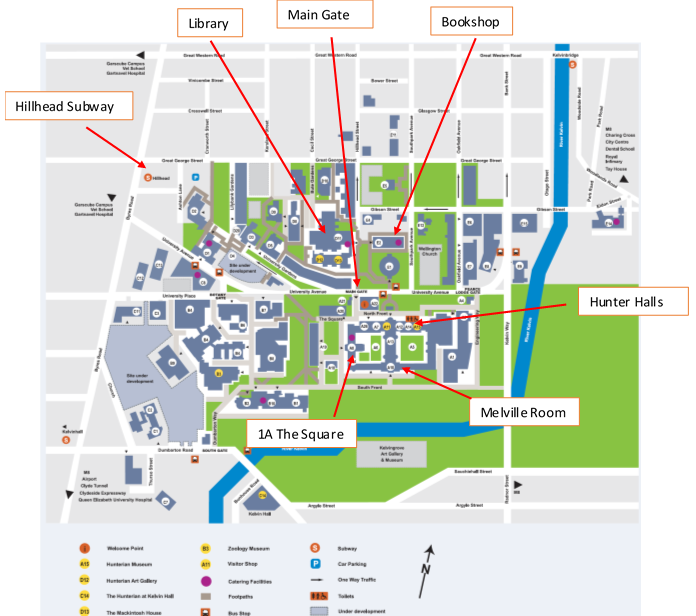 Bike: getting around Glasgow can be done by bicycle – nextbike operate 500 bikes and 53 stations across the city, where you can collect a bike for short term use, and drop it off at convenient locations. See https://www.nextbike.co.uk/en/glasgow/ for details. Campus Map