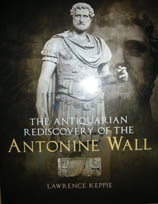 The Antonine Wall (a UNESCO World Heritage Site) has been visible across the central belt of Scotland between Forth & Clyde since its construction by the Roman legions over 1,850 years ago. The Antiquarian Rediscovery of the Antonine Wall by Lawrence Keppie takes up the story from the time of its abandonment in the reign of Marcus Aurelius and charts developments in our knowledge about it through the Middle Ages and after, up to the early years of the twentieth century, by which time the earliest scientific excavations had taken place. The author considers the place of the Wall in Scottish myth and legend, and the accounts of numerous travellers along its line. Extensive use is made here of little known or hitherto unpublished archival sources. The book is profusely illustrated with maps, portraits of prominent antiquaries and 19th century watercolours, reproduced in their original colour.

Professor Lawrence Keppie was a curator of archaeology at The Hunterian, where he is now an Honorary Professorial Research Fellow.