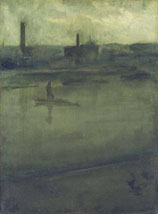 The University is the world centre for Whistler research. Past achievements include catalogues raisonnés of the paintings and of the drawings and watercolours. In 2006, The Correspondence of James McNeill Whistler was launched online and in 2012 a new catalogue raisonné of Whistler’s etchings was launched. The University is currently collaborating with international partners on an exhibition exploring Whistler’s relationship with the Thames and Battersea Bridge, and on a major Whistler retrospective to travel to Japan (2014–2015).

Grey and Silver: The Thames, oil on canvas, by James McNeill Whistler, © The Hunterian