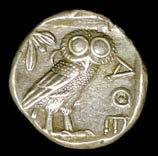 The Hunterian’s major numismatic project is to create a sylloge catalogue of its outstanding collection of 15,000 Ancient Greek coins. This is part of the British Academy’s Sylloge Nummorum Graecorum series, founded in 1922 with the aim of publishing full illustrated catalogues of the major collections of Greek coins in Britain.  Many other countries have now followed with their own publications.  The Hunterian Greek coins will be published in nine volumes of which two on the local issues of Greek cities during the Roman Empire (Roman Provincial coinage) have appeared. The work is being carried out by The Hunterian’s curators and colleagues in other institutions including the British Museum and St Andrews University.