‌Influenza A viruses cause seasonal outbreaks of respiratory illness that are often severe. Importantly, new strains frequently emerge to cause pandemics – worldwide epidemics in which many hundreds of millions become infected. We are interested in the structure of these prominent human pathogens; in particular, we are studying their propensity to form filamentous virus particles. 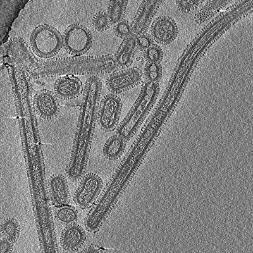 This trait has been postulated to be a feature of wild-type viruses, while laboratory strains more commonly form virions described as being spherical. We have developed novel methods for imaging viruses as they bud from the cell surface, allowing us to analyse the structure of the fragile filaments free of artefacts caused by purification procedures. We found that filaments frequently do not appear to contain genomes at their distal ends, as had been previously assumed, raising questions concerning their role in the infectious process. 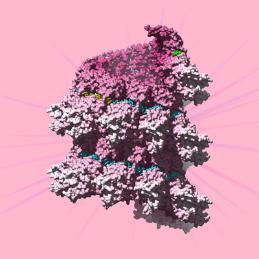 ‌Respiratory syncytial virus (RSV) is an important viral agent of childhood respiratory tract disease worldwide, causing pneumonia and bronchiolitis in infants. We are investigating the structure of the RSV virion and its replicative machinery. Working with partners at the Pasteur Institute and French National Institute for Agricultural Research (Institut National de la Recherche Agronomique – INRA) we recently published an atomic resolution model of the RSV nucleocapsid – a helical structure comprising the viral genome and N protein.

The nucleocapsid, rather than naked viral RNA, is the template for mRNA and genome synthesis, thus understanding its structure is critical in beginning to understand the process of viral replication. 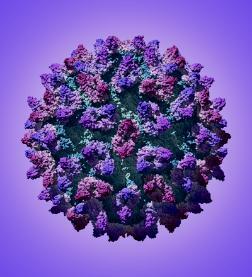 The calicivirus family includes noroviruses and sapoviruses that cause outbreaks of acute gastroenteritis known as winter vomiting disease. These viruses are particularly challenging to investigate, as they may not be propagated in the laboratory. A tractable surrogate is feline calcivirus, (FCV) a notable veterinary pathogen in its own right that causes respiratory disease in cats. FCV is the only calicivirus for which a protein cellular receptor has been identified – junctional adhesion molecule A (JAM-A).

We are studying the attachment and entry pathway of FCV to build an understanding of the early stages of calicivirus infection. We have published structures of FCV decorated with soluble fragments of JAM-A, revealing conformational changes in the capsid that we propose to be the first stages of uncoating (genome release). 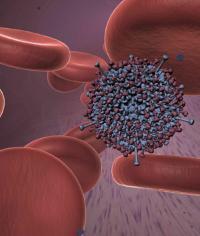 Adenoviruses are widely used as experimental gene therapy vectors as they are capable of delivering a large genetic payload and are able to target a wide range of cell-types. Upon intravenous delivery however, many adenoviruses become coated in the blood coagulation protein Factor X (FX). Coated viruses are then sequestered in the liver.

We solved the structure of adenovirus type 5 decorated with FX, showing that it binds to the major capsid protein known as hexon. By modeling the interaction at atomic resolution we determined a list of key amino-acids on the capsid surface that mediate the interaction. This allowed our colleagues in the Institute of Cardiovascular and Medical Sciences to design mutant viruses that do not bind FX and therefore may be used to target efficiently different organs for gene therapy.