Our laboratory is situated in the Henry Wellcome Building at the MRC-University of Glasgow Centre for Virus Research (CVR). Our main interests are the ways in which viruses cause disease; the immune response to infection; and the development of viral vaccines.

Our work focuses on viruses of importance to human and veterinary medicine, including morbilliviruses, caliciviruses, bunyaviruses, lentiviruses, coronaviruses and parvoviruses. Active research projects are investigating:

Measles is perhaps the most contagious infectious viral disease, with a basic reproduction number (R0) estimated at between 12 and 18. Exiting through epithelial cells of the upper respiratory tract, measles virus is transmitted primarily through aerosols. The most contagious period of measles is thought to occur four days before the development of a rash, and the aerosol droplets may hang in the air for up to two hours. Fortunately, measles is preventable by vaccination. Since the introduction of vaccination in 1968, it has been estimated that 20 million cases and 4500 deaths have been prevented in the UK alone. In recent years, measles has re-emerged, largely due to inadequate vaccine coverage. Since 2016, measles outbreaks have been reported across Europe, in Romania, Italy and France. In 2020, over 12,000 cases were reported in member states that submitted case data in the WHO European Region. Notably,61% of cases were reported in children less than five years old and 85% of patients were known to have been vaccinated.

Outbreaks in the UK have been associated with imported measles cases and have been predominantly caused by the B3 and D8 genotypes. For example, in the summer of 2016, an outbreak of the D8 genotype occurred within Sheffield Teaching Hospitals. This outbreak involved over 4,000 patient contacts and nearly 900 staff contacts from a single index case, culminating in 17 laboratory-confirmed cases of measles.

The rapid screening for antibody levels in the healthy population, such as health care workers, is important for quickly assessing the number of susceptible individuals when a measles outbreak occurs. To this end, we have developed measles virus pseudotypes with which virus neutralisation can be measured rapidly, safely and with high sensitivity. These pseudotypes enables us to measure precisely the level of humoral (antibody-mediated) immunity against genotypes of concern that is conferred by MMR vaccination in both children (Hu et al., 2022a) and adults (Hu et al., 2022b).

It is likely that SARS-CoV-2 will establish as an endemic virus of humans, which has the potential to lead to reverse zoonotic infections in animals that live close to humans. There have been sporadic reports of infections in pet cats in COVID-households, which demonstrates that cats are susceptible to SARS-CoV-2 infection and could act as virus reservoirs. Furthermore, serological studies and experimental infections have demonstrated that cats are susceptible to SARS-CoV-2 infection. Viral replication occurs in the upper and lower respiratory tract and shed infectious virus can be detected in nasal washes, oropharyngeal and rectal swabs, and viral RNA is detectable in faeces and occasionally urine. Moreover, cats are capable of transmitting SARS-CoV-2 to naïve cats via direct contact. The risk of reverse zoonosis and the potential for the establishment of cats as a reservoir for SARS-CoV-2 is unknown, warranting the investigation of the susceptibility of cats to SARS-CoV-2 infection and their capacity to transmit the virus to cats and other species as the pandemic progresses. Recently cat-to-human transmission was reported, demonstrating that a successful cross-species jump of SARS-CoV-2 into cats has the potential to expand the host range of the virus and generate an additional source of infections for humans and other species.  Although the risk is unknown, this would make the elimination of SARS-CoV-2 more complex. To understand the transmission dynamics and evolution of SARS-CoV-2 in cats we have set up surveillance to detect SARS-CoV-2 infected animals, testing samples submitted to our diagnostic laboratory. We are conducting studies to establish levels of SARS-CoV-2 cross immunity in humans and cats, which will help us to determine the zoonotic potential and virulence of SARS-CoV-2 viruses isolated from cats.

Despite considerable research progress, the host factors determining calicivirus virulence and pathogenicity remain unknown. It is evident that viral evolution in both human and veterinary calicivirus infections can lead to the emergence of new, more virulent variants, for example the FCV variants that cause "virulent systemic" (VS) feline calicivirus infection, which is often fatal in cats. Our colleagues in the CVR resolved the atomic structure of an attenuated vaccine strain of feline calicivirus, pre- and post-engagement with its host cell receptor. We are now collaborating with them to resolve the structure of related caliciviruses, including avirulent and virulent strains of FCV. Our aim is to determine the atomic resolution structure of virulent caliciviruses, investigating the association between structure and function. Our findings will reveal fundamental insights into the early stages of calicivirus infection that will facilitate structure-based approaches to the design of novel therapeutics and vaccines for human and veterinary medicine.

Feline immunodeficiency virus (FIV) is a widespread pathogen of both domestic cats and wild felids, and is the feline equivalent of HIV in humans. The clinical course of FIV infection is variable, depending on factors such as the infecting strain of virus and the age and health status of the cat. We don't yet know why some cats rapidly develop AIDS, while disease progression is slow in others.  As there are an estimated 8 million cats in the United Kingdom, conservative estimates would suggest that at any given time at least half a million healthy cats may be infected with FIV or FeLV.

Our goal is to understand how FIV evolves in naturally infected cats as disease progresses — can we predict whether disease is more likely to progress in an individual cat depending on specific host or virus factors? Such information will assist veterinarians in practice, as well as cat rescue shelters re-homing FIV-infected cats.

The development of FeLV and FIV vaccines is a clearly a priority issue for the welfare of cats. As a direct result of the ground-breaking work of researchers at the University of Glasgow, vaccination against feline leukaemia virus is now available in veterinary practices throughout the country. Based on the success of these studies on FeLV, our laboratory is now focusing on the development of an effective vaccine for FIV and the elimination of feline AIDS. 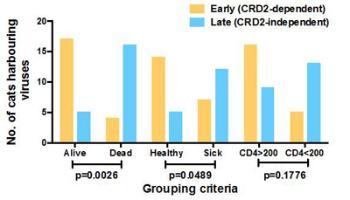 A commercial FIV vaccine is licenced in the US, Australia, New Zealand and Japan and we have conducted studies in order to understand how this vaccine affords protection against FIV infection. We analysed samples from cats vaccinated against FIV, in collaboration with Dr Julia Beatty (University of Sydney) and demonstrated that vaccination did not induce cross-reactive neutralising antibodies. Furthermore, in one Australian cat vaccinated against FIV, we identified and characterised a virus strain that we speculated might have overcome vaccine-induced immunity. We are currently testing methods to induce high levels of neutralising antibodies in order to develop improved vaccines. 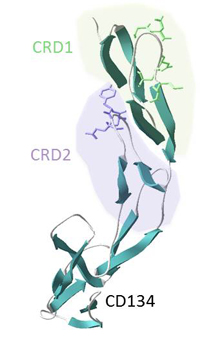 Another notable finding was that the FIV env gene sequence was relatively stable following natural infection, perhaps explaining why many naturally infected cats remain healthy and do not progress to AIDS. Moreover, by examining the receptor usage of viral variants, we observed that sick cats were more likely to harbour viruses displaying a distinct receptor usage phenotype compared to healthy cats, echoing the switch in co-receptor usage observed during the progression of HIV infection. We are now developing an algorithm that may be used to predict the prognosis for individual cats infected with FIV, based on the properties of the infecting strain.

Overall, this research has broadened our understanding of natural FIV infection and highlights that much can be learned from studying the differences between the feline and human lentivirus infections. Such comparative studies will contribute to the design of novel, safe and fully efficacious lentiviral vaccines.