Whistler at the University of Glasgow
Whistler, Nature and Science 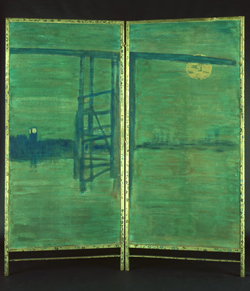 The University of Glasgow houses one of the pre-eminent collections of the work of the American-born painter, printmaker, aesthete, dandy and wit, James McNeill Whistler (1834–1903). Whistler’s night-time views of London and the Thames, striking full-length portraits, innovative etchings, flamboyant Peacock Room interior, and his progressive views about art, challenged the artistic establishment and laid important foundations for twentieth-century abstraction.

The Hunterian’s Whistler Collection comprises 80 oil paintings, several hundred drawings, watercolours and pastels, and over 1,500 impressions of his etchings and lithographs, as well as extensive holdings of his artist’s materials, including brushes, etching plates, and printmaking tools. The holding provides a major resource for the study of Whistler’s life and times. In addition, the Hunterian is home to the principal holding of the work of Whistler’s wife, Beatrix Philip (1857–1896), numbering nearly 300 items, including oils, etchings, drawings and watercolours. 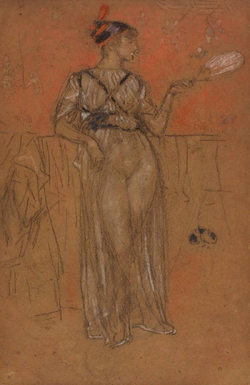 The collection is centred on Whistler’s Estate. Whistler bequeathed his Estate to his ward, Rosalind Birnie Philip (1873–1958), a younger sister of his late wife. Miss Philip subsequently gifted and bequeathed the art collection, together with Whistler's personal collections of decorative art and memorabilia, to the University of Glasgow in 1935 and 1958 respectively. Glasgow was chosen for several reasons, including Whistler's Scottish ancestry; the support in his lifetime of the painters, the ‘Glasgow Boys’, which led to the purchase by the city in 1891 of Whistler's portrait of Thomas Carlyle; and, in 1903, shortly before his death, the decision by the University of Glasgow to award Whistler the honorary degree of Doctor of Law. In addition, in 1954 Miss Philip presented the University with an important archive of over 4,000 letters as well as catalogues, press cuttings, photographs, books and memorabilia. This unrivalled archive is housed in the Special Collections Department of the University Library. Important additions have since been made to both holdings.

Whistler at the University of Glasgow
Whistler, Nature and Science

Whistler at the University of Glasgow

Together we have developed an ambitious Whistler Five-Year Plan.

More information on the activity of the wider Whistler Group can be found on the Whistler at the University of Glasgow webpages.