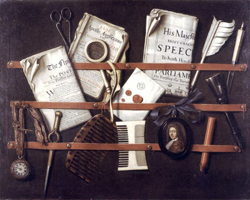 The Hunterian’s collection of Dutch and Flemish paintings includes some exceptional works, a number of which came to the gallery from the founding bequest of William Hunter (1718–1783). These include important paintings such as The Entombment Sketch by Rembrandt (1606–1669), Head of an Old Man by Rubens (1577–1640) and a panoramic Dutch landscape by Philips Koninck (1619–1688). In the twentieth century, the collection was greatly strengthened by the gift in 1963 from Ina J. Smillie of 26 Dutch and Flemish paintings assembled by her father, the Glasgow violin maker, Andrew Smillie. Within this group are works by Nicolaes Maes (1634–1693), Anthonie Leemans (1631–?1673), Erasmus Quellinus (1607–1678) and Hans Horions (c. 1620–1672).

Whilst the Flemish south of the Low Countries remained Catholic following a separation from the northern states in the sixteenth century, northern artists of the Dutch Republic worked within a Protestant context. This led to a move away from religious narrative painting towards landscape, still life and moralistic figure painting. Dutch genre painting is represented in the collection by Interior with Card Players by Hendrick Martenszoon Sorgh (1611–1670) and the long-term loan of The Fortune Teller by Jan Steen (1626–1679). 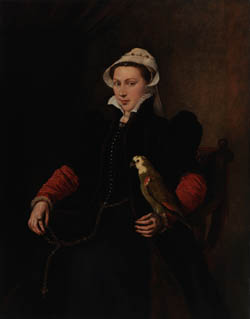 The collection also includes still-life paintings by Johannes Leemans (1633–1688) and Edwaert Collier (1640–1707), which employ the technique of trompe-l’oeil, meaning to ‘trick the eye’. The Trompe-l’oeil, Letter Rack was painted in around 1700 by Edwaert Collier, and through its assortment of symbolic objects seems to pay homage to the great Dutch Admiral, Michiel de Ruyter.

Whilst many of the Dutch and Flemish paintings are seventeenth-century, we have recently undertaken a project to conserve the sixteenth-century painting Portrait of a Lady with a Parrot by Antonis Mor (c. 1517–c. 1575), which was obscured by a yellowed varnish. Conservation has restored the painting to its original colourful and vibrant state. The painting is almost certainly a pendant to the portrait of artist Steven van Herwijk in the Mauristhuis in The Hague, suggesting that our painting shows his wife, Jonekin.