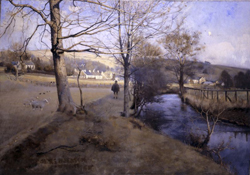 The Hunterian’s collection of over 200 works by the Glasgow Boys is one of the most important and extensive in a public collection. The ‘Boys’ – an informal alliance of some 20 artists that came together in the early 1880s – were determined to challenge the formulaic landscapes and narrative subjects of late Victorian Scottish painting, and to develop a distinctive style of naturalist painting.

Their strong interest in rustic realism, outdoor painting, and French-inspired tonal and compositional technique, led them to produce innovative works that attracted the attention of British and continental critics. Major examples include Autumn Sunshine by Edward Arthur Walton (1860–1922), Hop-Pickers Returning by Alexander Mann (1853–1908) and Moniaive by James Paterson (1854–1932). These are supported by an important long-term loan, The Hedge Cutter by George Henry (1858–1943), 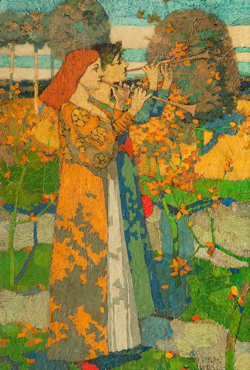 Work of the late 1880s, when the Boys were moving towards a more decorative approach, sometimes bordering on the abstract and inspired in part by Whistler’s progressive art, is well represented and includes small Gauguinesque panels by Charles Hodge Mackie (1862–1920) and decorative paintings of young children by E. A. Hornel (1864 –1933). Some of The Hunterian’s most important works are watercolours and pastels, with fine examples by Henry, Walton, Joseph Crawhall (1861–1913) and James Guthrie (1859–1930. Henry and Hornel’s trip to Japan in 1893–4 is well represented with two rare examples of Henry’s Japanese watercolours and seven paintings by Hornel. The second generation of successful Glasgow-based artist which emerged in the 1890s is represented with works by David Gauld (1865–1936), Bessie MacNicol (1869–1904), the innovative John Quinton Pringle (1864–1925) and others.

Paterson was one of the father figures of the Boys. In 1884 he married and moved to Moniaive, south of Glasgow. The following year he painted Moniaive. With its carefully organised composition, beautifully observed details and depiction of changing light effects, Paterson's assured large-scale landscape is among his most beautiful works. Gauld’s early painting, Music, illustrates more stylised and symbolic aspects of the Boys’ work and demonstrates his skills both as a painter and a stained-glass designer.