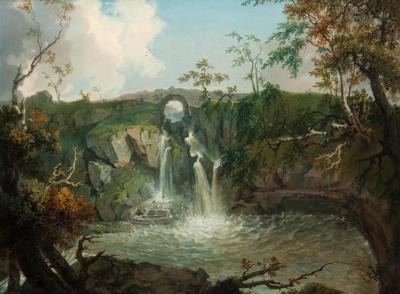 Leading figures in the development of a Scottish school of painting in the eighteenth century are represented, notably Allan Ramsay, Gavin Hamilton, John and Alexander Runciman, and David Allan. The early days of the Scottish schools of genre and landscape are illustrated with paintings and drawings by Charles Steuart, Alexander Nasmyth, Horatio McCulloch, and David Wilkie. Charles Steuart’s Waterfall which may show Blair Atholl, or possibly the Upper Falls of Foyer, near Loch Ness, is one of a series of paintings by Steuart celebrating the beauties of the Scottish landscape.

Mid-nineteenth century landscape painting in Scotland is well illustrated by the holding of the work of William McTaggart. From the latter part of the nineteenth century, Scottish artists – notably the Glasgow Boys and the Scottish Colourists – responded to and anticipated many of the solutions adopted by their international counterparts. The Hunterian’s collection of Glasgow Boys and Scottish Colourists is one of the most important and extensive in a public collection.

More recent Scottish art is strongest in works by mid-twentieth century artists, notably The Edinburgh School and the short-lived, but influential, international Cobra group. Joan Eardley, one of the outstanding figures of post-war Scottish art, celebrated for her paintings of Glasgow children and the Aberdeenshire coast, is represented by 29 works on paper and 13 paintings. Salmon Nets and the Sea is a striking and characteristic example of the dramatic landscapes she painted in Catterline, a fishing village near Aberdeen. In addition, the Hunterian’s holding of works by Eduardo Paolozzi, which includes sculpture and prints, and also exhibits from the groundbreaking exhibition Lost Magic Kingdoms at the Museum of Mankind (1985), provides an important representation of the sculptor’s work.