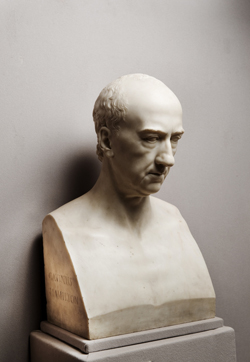 The sculpture collection at the University is small – numbering some 100 works – but significant in its historic range and relevance to the history of the University and its buildings, and for the quality of its major works.

The earliest sculpture is a bust from the mid 1650s of Zachary Boyd (c. 1585–1653). Boyd was the author of a rhymed version of the Bible and Rector of the University of Glasgow in 1634, 1635 and 1645. The most recent works include pieces by Mark Dion, Christine Borland and others, from the early twenty first century.

Portrait busts record figures associated with the University and Scottish culture. These include Christopher Hewetson’s neo-classical bust of the great Scottish painter and antiquarian, Gavin Hamilton, of 1784, and the life-size marble portrait of the Glasgow engineer James Watt, by Sir Francis Chantrey (on display in the Hunterian Museum). Both of these were first displayed in the Hunterian Museum which opened in 1807. 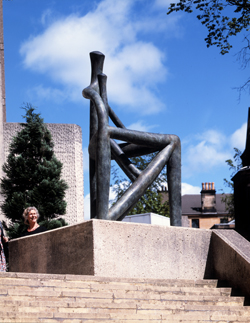 When the Hunterian Art Gallery building opened in 1980, an open-air Sculpture Courtyard was created between the Gallery and the University Library and a number of late twentieth-century works were acquired for display. These include Eduardo Paolozzi’s magnificent bronze Rio of 1964, the gift of the Dundee collector of surrealist art, Gabrielle Keiller, and Jake Harvey’s Tools for the Shaman, carved from Kilkenny limestone and commissioned in 1996. Paolozzi was also commissioned to make the cast aluminium panels for the entrance doors to the painting gallery, installed in 1981. The Paolozzi holding includes an important group of work  exhibited as part of the Museums of Mankind’s Lost Magic Kingdoms exhibition, 1988–9. These were presented by Professor Malcolm McLeod, the exhibition co-curator with the sculptor.

The collection includes a number of modern works which are displayed from time to time in the galleries, including works by Stephen Cox, Gavin Scobie, Alexander Stoddart and William Turnbull. Works are also displayed within the campus grounds, notably by Dhruva Mistry and George Rickey.