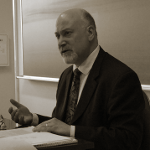 Prof Metzger writes on Roman law, especially the law of procedure, and on the moral philosophy and jurisprudence of Adam Smith.

His research in Roman procedure has focussed on reconstructing both rule and practice in the conduct of civil litigation in classical law. The traditional source material — fragments of laws and literary sources preserved by manuscript — is valuable but insufficient, and Prof Metzger has devoted considerable time to the study of inscriptions, in particular the lex Irnitana (a city charter from the first century AD), and documents from Campania (happily preserved in the wake of Vesuvius’ eruption). In A New Outline of the Roman Civil Trial (1997) he examined how civil trials were initiated, adjourned, and brought to judgment. Certain details in the regime were examined in later studies: ‘Interrupting proceedings in iure: vadimonium and intertium’ (1998); ‘A Fragment of Ulpian on acceptilatio and intertium’ (2005); ‘Absent Parties and Bloody-Minded Judges’ (2006); ‘Remedy of Prohibition in Roman Civil Trials’ (2012). In Litigation in Roman Law (2005) he examined the ‘pretrial phase’, following two preliminary studies (‘The current view of the extra-judicial vadimonium’ (2000) and ‘The Case of Petronia Iusta’ (2000)). Those studies drew considerably on the Campanian evidence. The broad theses are considered further in ‘Lawsuits in Context’ (2006) and ‘Civil Procedure in Classical Rome’ (2010).

Adam Smith lectured in jurisprudence at the University of Glasgow, and a significant portion of his jurisprudence lectures — preserved in students’ notes — is given over to Roman law. Prof Metzger has published two studies of these lectures. The first study (‘Adam Smith and Roman Servitudes’ (2004)) considers Smith’s debt to Samuel von Coccei and Smith’s difficulty in adapting the writings of a natural lawyer to his own system of ethics. The second study (‘Adam Smith's Historical Jurisprudence and the “Method of the Civilians”’ (2010) examines Smith’s decision to reorganize his lecture in accordance with contemporary civilians. The latter piece is now republished in Adam Smith and Law, ed. R. Malloy (Routledge, 2016).

Prof Metzger is Editor-in-Chief of Roman Legal Tradition, a periodical dedicated to the civilian tradition in ancient, medieval and modern law. He manages the imprint Traditio Iuris Romani and the portal IusCivile.com. He serves on the Council of the Stair Society. He is preparing An Introduction to Roman Civil Procedure for the Oxford University Press.