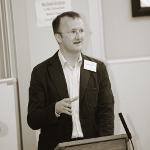 Mark Godfrey’s main research field is Scottish legal history, especially the history of central justice and dispute settlement in the medieval and early modern periods. His work has been based on extensive archival research into late medieval court records in Scotland, principally the unpublished manuscript records of acts and decreets of the Court of Session, Scottish Parliament and King’s Council between 1470 and 1540. He has published widely on the origins and development of the Court of Session, the foundation of the College of Justice in 1532, and dispute settlement generally in sixteenth-century Scotland, with articles appearing in the Journal of Legal History and Tijdschrift voor Rechtsgeschiedenis. He has published a monograph on the origins of the Court of Session and the development of central justice in late medieval Scotland, Civil Justice in Renaissance Scotland: the Origins of a Central Court (Leiden, Brill, Medieval Law and Its Practice, 2009).

Other projects have included contributing a chapter on Parliament and the law to The History of the Scottish Parliament published by Edinburgh University Press, and participation in research groups on the history of ratio decidendi and on the history of delay in civil procedure, sponsored by the Gerda Henkel Stiftung and involving contributions to volumes in the series Comparative Studies in Continental and Anglo-American Legal History, published by Duncker and Humblot, Berlin.

Mark Godfrey is a member of the Editorial Committee of The Journal of Legal History, having served as Editor from 2011-2015. He has also previously served as Treasurer and a member of the board of Trustees of the Society for Scottish Medieval and Renaissance Studies, a member of the Council of the Scottish Record Society, a member of the Council of the Stair Society, Secretary of the Scottish Legal History Group from 2004 to 2011, and as Reviews Editor of the Edinburgh Law Review from 2008-2012. International activities have included a six-month visiting research fellowship at the Max Planck Institute for European Legal History, Frankfurt am Main in 2006, a six-month visiting professorship in 2012 at the J W Goethe University, Frankfurt am Main, and participation in three research groups in comparative legal history funded by the Gerda Henkel Stiftung on the subjects of civil procedure, judicial decision-making, and central courts and jurisdiction in continental and Anglo-American legal history. Mark also organised the 21st British Legal History Conference, held at the University of Glasgow in July, 2013.