Rossie Law hillfort is characterised by a single bank enclosing the top of the hill. 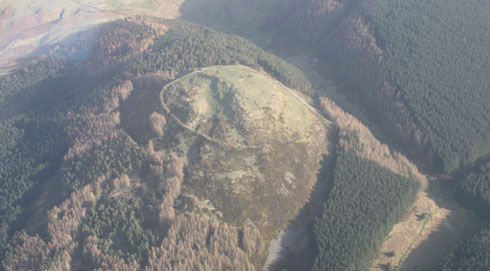 A steep and snowy geophysical survey was carried out at Rossie Law hillfort to identify the extent of the archaeological features related to this bank and any interesting internal features. 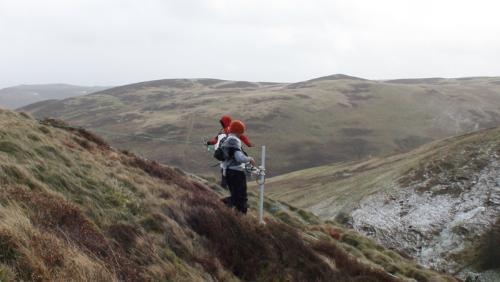 Rossie Law hillfort was excavated in advance of the fieldschool in late June 2012. The site excavations included four trenches, one large trench investigating the rampart enclosing the hilltop near the entrance and another corresponding trench on the opposite side of the fort for comparison.

The trench across the bank on the SE side of the fort revealed evidence for two timber palisades which were constructed on the mid-slope of the hill, roughly 5m apart.  Behind the uppermost palisade a lens of burnt timber was subsequently overlain by several layers of midden upon which a rough stone bank, approximately 4m wide, was constructed.  The stone for the bank was quarried from outcropping bedrock within the fort.  Fragments of prehistoric pottery were retrieved within a quarry hollow behind the bank.  A second trench was deturfed over the bank on the NE side of the fort, but due to a lack of time it was not fully excavated.

On the summit of the Rossie Law two further trenches were excavated to try and clarify the presence of internal features.  A quarter of a circular hollow on the summit of the hill was examined in a trench which had a maximum extent measuring 8m by 8m.  The excavation demonstrated that a natural hollow which retained water had been augmented and enclosed by a low stone and earth bank.  The deposits associated with this feature were quite sterile and likely a place that was kept clean.

The second trench on the summit of the hill measured 8m by 3m.  Within this trench there is evidence for a possible prehistoric structure which had been distubed by post-medieval activity.  The main feature revealed in this trench was a circular stone slab setting for a fire measuring less than 2m in diameter.