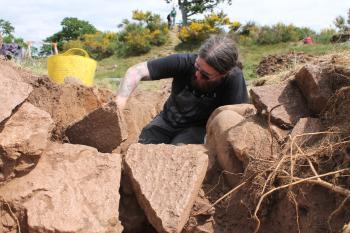 Kay Craig was investigated through two excavation trenches and a small area geophysical survey.
One excavation trench was positioned to explore the outer bank and inner hollow.  The outer bank, which encircles the SW side of the hill, was recorded to a height of 1.2m and was composed of a series of earthen deposits which was faced with stone.  The mixture of material used in its construction points to a variety of sources.  At least two phases for the construction of the bank was recorded.  The lower portion of the bank was composed of several discrete dumps which appeared to contain occupation debris.  The source of this material is unknown.  It is possible that these lower deposits formed an early earthen bank, which was subsequently rebuilt with stone facings.

A hollow to the E of the bank was likely a natural feature which had been subsequently augmented by quarrying along its W and SW edge.  The quarrying created a vertical edge with substantial drop behind the bank.  At some point in time the uneven quarried edge was intentionally filled in with stone to form and relatively flat face.  Subsequently, the hollow was partially filled in with stone, some of which may have been rubble from the structure on the summit of the hill.  The upper stone fill formed a roughly level surface and may have acted as a courtyard to keep animals.  Fragments of pottery from this phase of infilling have been initially identified as Medieval. A more recent latrine pit was cut into the upper stone fill of the hollow. 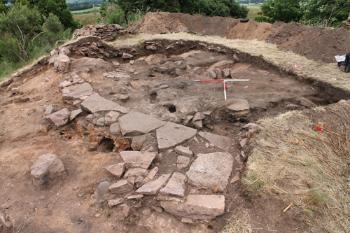 The second trench explored a circular structure on the summit of Kay Craig. Only very ephemeral traces of occupation prior to the construction of the circular structure were recorded.  The circular structure was also in a poor state of preservation. Only the remains of the basal course of the wall survived.  Based on the arc of the wall the structure would have been about 11m in diameter.  The wall width recorded at Kay Craig was about 1.5m.  Large boulders acting as a second course to the wall at the NW end of the trench were of a different character to the stones forming the base of the wall.  These boulders may represent a secondary build of the wall, suggesting multiple phases of occupation associated with the structure.  Internally the traces of occupation have been heavily disturbed, but included a hearth setting with fragments of metalworking debris surrounding it alongside a scatter of more prosaic finds, such as a whetstone and an unfired clay loom weight. 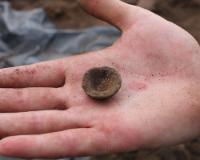