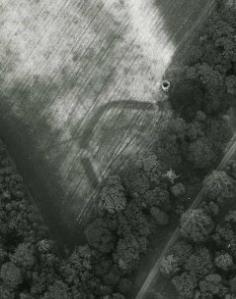 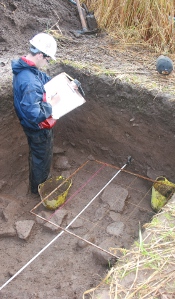 Lying less than 1.5km to the south of Forteviot is a substantial enclosure at the Green of Invermay.  Ploughed flat over the centuries, it was first identified as a cropmark from the air.  Although not a hillfort, its substantial ditch and naturally defensive location on the edge of a steep river terrace suggests that this enclosure was an important settlement. Excavations suggest that the enclosure was likely to be a 12th to 14th century medieval earthwork or moated site.

A narrow trench was excavated through the interior of the enclosure and into the ditch. The initial fills of the 1.2m deep ditch had been rapidly back filled. Subsequent shallow deposits consisted of ash, rubble and sherds of 12th to 14th century pottery. The uppermost fills of the ditch also contained medieval pottery - Scottish White Gritty Ware- which appears to have been swept or dumped into the ditch from the interior. A possible internal division within the enclosure consisting of a narrow palisade slot was discovered. This slot would have supported a continuous line of timbers, reinforced and packed with stones.

Elsewhere within the interior there were a few traces of medieval occupation associated pottery and metalwork, but these traces had been severely disturbed by centuries of cultivation.  Also within the plough soil a trumpet-headed brooch from the 1st and 2nd centuries AD was found. This single artefact suggests that there may have been earlier activity on this site.  The lack of post-medieval finds from this site, even from the upper plough layers suggests that the area was no longer a focus of settlement in the later medieval centuries, but instead became an open field within the redefined estate.

The enclosure at the Green of Invermay is tentatively interpreted as being the original baronial centre of the Innermeath Estate. Pont’s map of the late 16th century shows that the focus of the estate had shifted by this time further upstream along the Water of May near the present day estate house. At some point a doocot was constructed at the northeastern end of the Green of Invermay enclosure, which may have deliberately marked the location of the ancient centre of the estate. 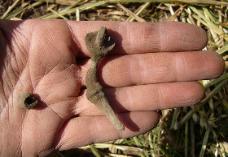