In 2011 Castle Craig was explored as part of the SERF hillfort research programme.  The site was excavated during the SERF field school and directed by Dr Heather James (Northlight Heritage).  Initial investigations in 1978 by John Sherriff were limited to a few small trenches exploring the freshly quarry damaged outer bank of the fort and a series of pits (Sherriff 1984).  Although Sherriff revealed tantalising evidence of occupation of the site, no dating evidence was obtained and the large enclosure on the summit had remained unexplored.   Therefore with the goal of characterising the site and obtaining datable evidence five small hand-dug trenches were excavated across the site in 2011 by SERF, with the largest across the summit of the hill.

Unexpectedly, on the summit of the hill a broch with massive drystone walls over 5m thick and 1.5m high was discovered beneath a later timber, earth and stone bank of the enclosure. 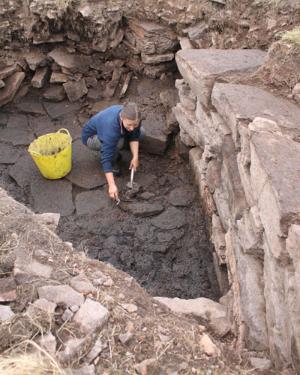 This discovery was exceptional for several reasons. Although the broch had been burnt and deliberately demolished, it appears that the ground floor survives more or less complete. Within the rubble filling the interior there were numerous Roman trade goods and Iron Age domestic artefacts, dating predominantly from the 1st or 2nd century AD.  Moreover it appears that the subsequent refortification tool place in post-Roman times.  A single Norse ring pin was the only find belonging to this later period. A possible rectangular structure abutting the palisade may be of a similar, post Roman, date. Brochs are most common in the northern and western periphery of Scotland, and well preserved Lowland examples are rare. Rarer still are sites which allow the evolution a Celtic stronghold to be observed in such details from first contact with the Romans to the emergence of the Scottish kingdom.

The broch crowns a prominent hill on the lower reaches of the Ochil hills. The circular fortified dwelling was built on a massive scale measuring about 23m in overall diameter and 12.5m in diameter internally. The walls are over 5m thick and in places stand over 1.5m high.  The entrance was located on the south-west and on the north-west side a cell was built into the thickness of the wall, perhaps leading to a staircase to the upper level. The walls were finely constructed of regularly coursed large blocks of locally quarried felsites with a battered exterior. Extensive areas of rubble scree suggest that the walls originally stood at least two stories high. A small area of the floor was exposed which consisted of flat slabs and the natural subsoil. 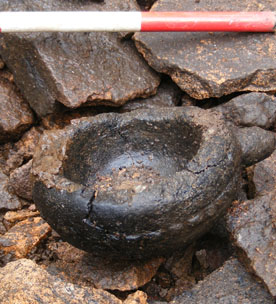 These were mixed with Roman ‘trade goods’ – fragments of three glass bangles, of three glass vessels and of four bronze bracelets as well as other bronze objects. Complete objects include a glass ‘melon’ bead and an amber bead. Above this destruction level was a deposit of about 1m of tumbled stones which appears to derive from the upper levels of the broch. This tumble also contained pockets of charcoal and burnt material which produced a bronze Roman patera (sauce pan), a glass vessel sherd and some burnt mammal bones. 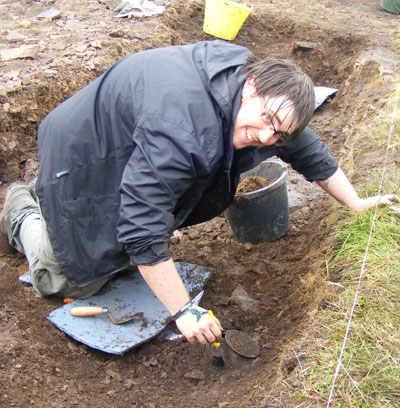 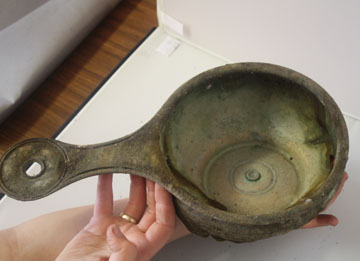 This deposit was thought to represent the deliberate demolition of the broch remains as the tumble was predominantly vacuous and therefore must have been deposited over a short space of time.

A low earth and stone bank, about 28m in diameter was built directly upon the deliberately infilled broch. The excavation identified at least two post-holes within this bank, suggesting that the bank supported a timber palisade. A Norse-style bronze ring-headed pin from within the demolition rubble suggests that the palisade could have remained in use into the 9th or 10th centuries.  On the summit of the hill there were traces of a rectangular structure, that was not examined in detail, but which may be a building contemporary with the palisade.

Below the summit there were other fortifications. The most impressive was a rock-cut ditch (at least 1.9m deep), filled with rubble, presumably from the broch. Towards the base of the hill banks of earth and stone defined the outer perimeter of the fort.

The SERF team would like to thank the landowner David J. Mitchell of Pairney Farm for permission to excavate the site and to Iona Murray from Historic Scotland and John Sherriff from RCAHMS for their assistance.