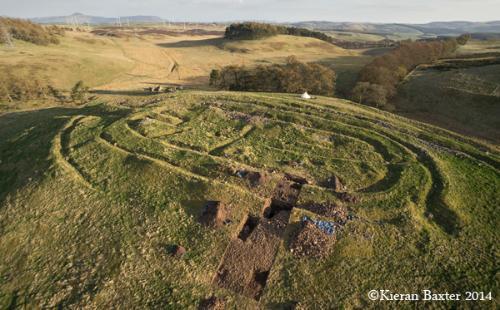 Over two seasons SERF explored the hillfort at Castle Law Forgandenny.  In 2010 this site was surveyed by the RCAHMS revealing a potential complex sequence of construction and remodelling of the site in prehistory.‌

Geophysical survey was carried out at Castle Law, Forgandenny prior to the SERF programme of excavation.  Despite the influence of the underlying igneous geology the result revealed differences in the magnetic character of some of the ramparts, which suggested that they were built using a variety of materials or had been modified in a range of ways. 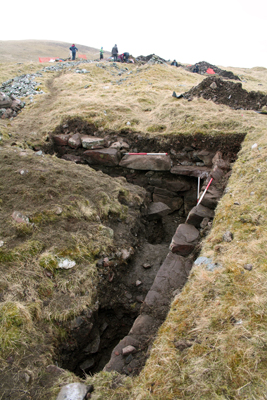 In the Spring of 2013 and 2014 a variety of trenches were excavated in order to explore key features of the hillfort. Four trenches were dug to define the massive stone walls of the enclosures on the summit of hill, which had been previously exposed by the antiquarian Edwin Bell at the end of the 19th century.  The stone walls comprised neat stone facing stone of varying geologies with a core of water worn boulders. The walls were substantial, measuring over 4m wide with the inner enclosure wall surviving up to 1.4m in height on the north side of the hill.  No timber clear beam slots were recorded in the surviving walls.  However, within one of the trenches a band, about 0.5-1m in thickness and width, of in situ vitrified stone was recorded within the wall core. This vitrification may be the result of the combustion of a horizontal timber structure.  Small fragments of a RAF Hawker Hurricane plane (pers comm Terence Christian) were found amongst the topsoil confirming the reports of a crash on the hill in the 1940s. 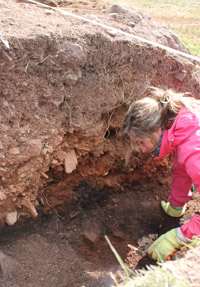 Away from the summit two trenches were positioned to investigate putative hut platforms as well as a portion of the bank enclosing summit of the hill.  The results revealed very ephemeral traces of occupation, which included a thin platform of cobbles and indistinct spreads of silt within a low bank of chipped stone.  The result of the investigations of the bank was very surprising, demonstrating several phases of rebuilding.  The initial construction included redeposited natural, occupation material and fragments of chipped bedrock.  This material likely comes from the excavation of the rock cut ditch located immediately outside of the bank, which was only partially exposed during excavation. 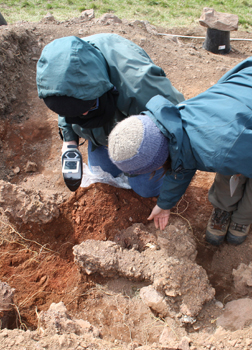 A second phase of building comprised massive boulders, but was destroyed prior to the construction of a large earth and ash bank, which included in situ vitrified soil.  Distinct concentrations of fused soil, running in rough parallel lines, suggest an arrangement of timbers within the upper layer of the bank which have been completely consumed by fire.  On the S face of the bank a deposit of greyish silt contained distinct lenses of burnt brushwood, which may either be the remains of a structure or vegetation clearance.   The final phase of the bank was characterised by a capping of several layers of stone.

An outer bank on the S side of the hill was also explored, revealing the bank to have been largely composed of a mix of earth and stone which had been excavated from an outer ditch.  Thin lenses of burnt twigs and vegetation were recorded near the top of the bank and may be the remains of a light structure or fence on the bank. 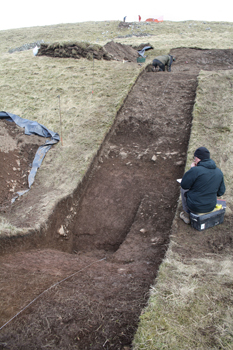 SERF would like to thank the Dupplin Estate and Mr. Michael Blanche for giving us permission to conduct our excavations.  SERF is supported by Historic Scotland.‌