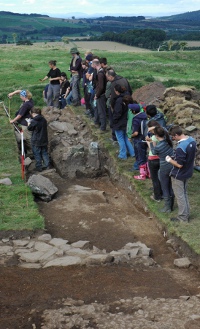 In 2010 SERF has excavated the hillfort of Law of Dumbuils (or East Dumbuils).  In the shadow of the hillfort at Castle Law, Forgandenny, Law of Dumbuils is relatively low-lying but still has impressive views of the Earn valley. The fort is defined by at least three ramparts following the contours on the north side of the hill.  The ramparts tail off as the natural slope steepens towards the south.  The main entrance is on the northwest side, channelling access into the interior, which is largely uneven and punctuated with bedrock outcrops. There is a possible second entrance on the east side, but this area appears to have been disturbed by later use and plantation.

A trench 35m long by 2m wide was excavated across the ramparts.  The outermost rampart or counterscarp had been greatly denuded and survives only as a very low earthen mound. Inside this a shallow ditch had partially cut into the bedrock, which had lay close the surface or was exposed at the time of construction.  The middle rampart also had an earthen core, but at the summit was crowned with palisade packed with massive boulders.  In between this and the innermost rampart was a roughly flat platform with portions of exposed bedrock.  The initial phase of the inner rampart was composed of an earthen core, supported on its northern side by a stone face or a palisade.  At a later date this rampart was cut into and broadened on its southern, interior face.  This secondary phase was largely composed of large boulders, which may have been interspersed with timbers.  Two objects of iron, including a small axe head suggest that this phase dates to the middle Iron Age or later. 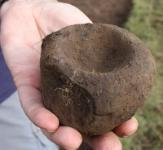 Within the entrance hollow there was a paved path and to the south of this was a pebbled surface. The southern edge of this surface was defined by a rough line of boulders, running along the base of a bedrock outcrop.  On top of the pebble surface was rubble containing a variety of stone finds, such as hammerstones, a mortar, a pecked cup stone and a cannel coal disk.

Two test pits within the interior did not reveal any significant archaeological evidence.