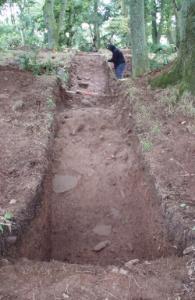 Situated only a few miles to the southeast of Forteviot village the fort at Jackchairs Wood was thought to have been the possible pre-cursor to the palace at Forteviot.  Jackschairs Wood fort is defined by four ramparts and associated outer ditches, all of which follow the contours of the hilltop and enclose an internal area that is dominated by a substantial central rock outcrop. Although relatively lowlying, there would have been extensive views to the north east and west. 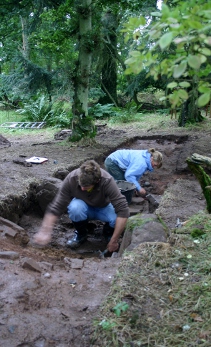 A long (35m) narrow trench was excavated across the ditches and ramparts and into the interior of the hillfort.  The outer ramparts were made of earth with not clear signs of additional structural features. The accompanying outer ditches to these ramparts had relatively ‘clean’ and homogeneous fills.  By contrast, the innermost rampart was structurally more complex. An inner stone facing survived up to three courses high and a large upright boulder near the summit would have supported an equally substantial timber post.  Evidence for the subsequent destruction of this rampart was preserved in the charcoal-rich deposits and rubble layers of the innermost ditch. Within the interior of the fort traces of an internal corridor and stone paving was identified under destruction layers of the fort’s defences.

A series of radiocarbon dates places the construction and use of all three ditches, as well as the features within the interior, to the Early Iron Age (700-500BC).  This suggests that Jackschairs fort was occupied for a relatively short space of time.  There is as present no evidence to suggest that the fort was an immediate predecessor to a Pictish palace at Forteviot.