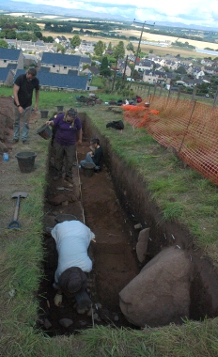 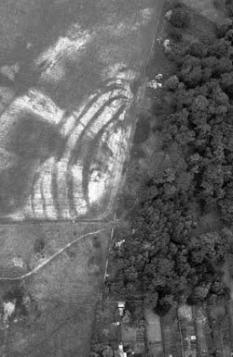 Dunknock is a low but conspicuous hill overlooking the village of Dunning. Over the years a wide range of objects dating from the Neolithic to the medieval period, including a Bronze Age socketed axehead, have been found here; highlighting the significance of this hill over millennia. The fort, consisting of at least four roughly parallel ditches, was first identified as cropmarks from the air. This hillfort would have been an impressive visual monument, particularly from the north.

The fort was examined through several small-scale trenches in 2008 and 2009 with Glasgow Archaeological Research Division (GUARD). The earliest dated feature was a narrow Late Bronze Age (around 1200-1000BC) ditch located on the east side of the hill.  However, most of the evidence recorded appears to date to the Early Iron Age (700-400 BC).  During this period Dunknock became a focus of intense settlement and activity.  The hill was significantly modified through the construction of several massive ditches and ramparts; yet, the fort does not appear to have lasted long in this monumental form.

On the west side of the hill excavations showed that one of these ramparts had a substantial earthen core, which had been reinforced with timber and stone. The rampart was built on a levelled pebble surface where a temporary timber palisade was erected to help support the earth rampart during its construction. Some time later the rampart was destroyed; timbers were burnt and stone and earth had collapsed down slope.  A portion of a ditch was uncovered and yielded a notable amount of later prehistoric pottery. 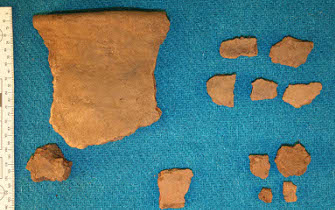 Evidence was uncovered showing the interior was occupied when the hill was fortified. On the east side of the hill, just above crest of the slope, traces of a possible rectangular scooped structure were excavated. Sherds of coarse prehistoric pottery, daub-the outer coating for a wattle wall- as well as fragments of both saddle and rotary querns were found within this structure. Nearer to the summit of the hill a substantial dug-feature with a complex series of deposits was also revealed.

Although no evidence of medieval settlement or activity was recorded on Dunknock by SERF, our small trenches may have missed any such traces and/or later cultivation of the summit of the hill may have disturbed or completely removed any less substantial remains of the past.