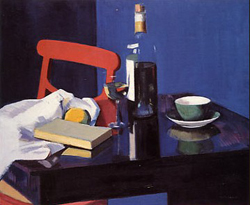 The Hunterian holds one of the finest collections of work by the four painters who became known, in their lifetime, as the Scottish Colourists –Francis Campbell Boileau Cadell (1883–1937), John Duncan Fergusson (1874–1961), George Leslie Hunter (1879–1931) and Samuel John Peploe (1831–1935). The collection comprises over 130 paintings, works on paper, and sculpture. The majority of the works were presented by three collectors: Alec Macfie (1898–1980), former Professor of Political Economy at this University; Gilbert Innes (1888–1971), a Glasgow businessman who knew Cadell personally; and George Smith (1907–1997), a Glasgow-based accountant.

All aspects of the Colourists’ art are represented, from Peploe and Cadell’s sparkling representations of Iona to Fergusson’s vibrant portrayals of women. Highlights include: work from Fergusson’s productive years in Paris between 1907 and 1913, notably Fauve-related portraits, landscapes and large scale nudes; a unique group of early Hunter drawings for magazine illustrations and prints – the only known works by Hunter to have survived the 1906 San Francisco earthquake which hit during his sojourn in California; and a rare group of Fergusson etchings bequeathed by his widow, the dancer Margaret Morris. The holding of work by Fergusson is particularly strong and includes  Les Eus, one of the most significant British paintings of the early twentieth century, as well as prints, drawings and watercolours, and key examples of his sculpture, notably the carved wooden Dryad and the brass Eastre, both of 1924. 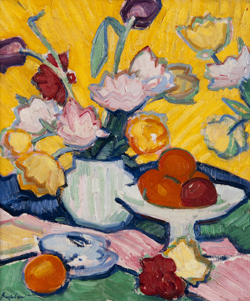 Tulips in a Pottery Vase vividly illustrates how Peploe’s association with leading figures of the Parisian avant-garde between 1907 and 1912 which led him to simplify forms and to convey light and space through the use of vibrant primary colours. Still Life and Rosechatel is a striking example of the series of carefully composed studio interiors Cadell painted in the 1920s. It was shown at the 1924 Paris exhibition Les Peintres de l’Ecosse Moderne, where the Colourists exhibited together for the first time and won enthusiastic press coverage.