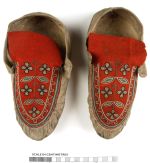 The objects in The Hunterian collection from North America were made by the native peoples who inhabited the area which now comprise Canada, Alaska and Greenland. Historically, there were over five hundred different tribal groups who spoke hundreds of very different languages.

These people adapted to the very different climates across this vast area. Boots, snowshoes, mittens and snow goggles were needed in colder areas, while moccasins were suitable for warmer regions. In all regions, tribal peoples represented their views of the world, especially their sense of kinship to animal beings and spirits, in their art. The animals shown on many objects might be protective or might be clan ancestors, zigzag designs might mean powerful serpent-beings, and flowers were often from medicinal plants which brought life. Decorations made from moose hair, porcupine quills, or silk and beads all represented distinct tribal ways of knowing the universe. Hunting tools were often also considered sacred, as they took the lives of animal 'relatives' to bring life to humans. Rattles, such as the bird-shaped dance rattle, and drums were the main musical instruments of the Northwest Coast tribal peoples who performed music, singing and dancing on ceremonial occasions as well as during informal recreation.

Most of the objects in The Hunterian's collection from this area date from the 18th and 19th centuries. Although the accession records are incomplete, it is possible, and indeed likely that several objects from North America were obtained from the third voyage of Captain James Cook. Today there are several million tribal people across Canada, Alaska and Greenland, and native cultures are flourishing. Artefacts such as these are being studied by tribal members in order to preserve and revive traditions. The Hunterian has facilitated research by the Great Lakes Research Alliance for the Study of Aboriginal Arts and Cultures (GRASAC) since 2004.