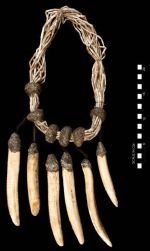 Emile Louis Bruno Clement (1843 - 1928) was born in Germany and moved to England in 1870 where he worked as a teacher. He returned to Germany in 1882 and spent several years there excavating and acquiring Bronze Age material which he sold to British museums. Clement then travelled extensively in Western Australia in the late 19th century.

Emile Clement was a fascinating and complex character. At various times he became a teacher, geologist, archaeologist, prospector, ethnographer and author of children's books. During his travels in Australia he amassed a large collection of Aboriginal objects and natural history specimens. When he returned to the UK in 1900, he continued to collect and sell, having objects sent to him by people living in Australia. He authenticated the objects he sold by including detailed maps of his travels, sketches of the objects and photographs.

Clement sold to over thirty museums around the world, including The Hunterian. Letters from Clement to the curator at The Hunterian along with illustrated lists of objects are held in The Hunterian records section of Special Collections in the University of Glasgow library.