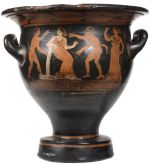 The Hunterian houses the finest body of Roman material in the west of Scotland, from the periods of military occupation in the first and second centuries AD, including many 'distance slabs', altars and gravestones from forts on the Antonine Wall. There is also a major collection of artefacts from excavations at brochs and other settlements of the Scottish Iron Age. ‎

Artefacts presented by local collector A. H. Bishop in 1914 and 1951 cover the development of human activity in Scotland and western Europe from the earliest hunters and fishermen to medieval times. Smaller bodies of material illustrate the early civilisations of Egypt and the Mediterranean world.

The internationally important ethnographic collection has its origin in ‘first contact’ objects acquired by William Hunter from the pioneering voyages of Captain James Cook to the South Seas and the north-west coast of North America in 1769-80. It also includes Pacific Islands material acquired by missionaries in the 19th century.

The historical collection includes medieval and modern pottery, Scottish and English glass and pewter, medallions by James and William Tassie, and death-masks.

Any enquiries about our Archaeology, World Cultures and Historic Collections should be directed to archaeology-enquiries@glasgow.ac.uk