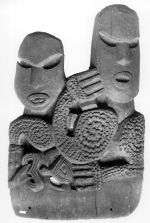 Twelve Maori woodcarvings were presented to the Hunterian Museum in 1864 by William Clarke.  The carvings were in from the house of a local Ngapuhi tribal chief known as Pene Taui.  The story is that Pene Taui had died and as was custom his house was to be burned and Clarke "rescued" the carvings and brought them back to Scotland. The carvings are the oldest complete set of carvings known, certainly for the north of New Zealand, and are internationally important.

Clarke was a prominent early settler in New Zealand's North Island, who carried out the first land surveys for the Bay of Islands and Hokianga districts. He married a Maori woman while in New Zealand whose name was Te Owai Tauehe.  They were married in about 1857-58 and had two children William and Hannah Clarke.  For many years members of the Clarke family have visited the Hunterian to view the carvings. We are currently working with Chanel Clarke who is the Curator Maori at the Auckland Museum. She is the great, great, great grand-daughter of William Clarke.

The Hunterian is fortunate in being able to develop use of this unique collection in conjunction with the family of the original donor.  The warm relationship that the Hunterian continues to have with the Clarke family is perhaps unique.