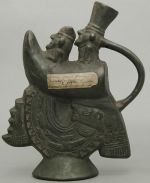 Frederick Eck (1806-1884)is something of a mysterious figure. No picture of him is known, and little is known about many aspects of his life. He made his fortune in Chile, working for a London finance house.  In 1852, having married a Glasgow woman, he moved to Scotland, and built Hollybush House, near Dalrymple in Ayrshire. Here he displayed his fine collection of geological, ethnographic and historical artefacts, especially South American, and Asian material. In 1866 his young son died, and soon afterwards the family moved to London. After Frederick’s death in 1884, his family donated the collections to the Hunterian Museum, although a few items were also given to the V&A in London. The collection was accompanied by beautifully detailed, bound leather catalogues.

The ethnographical objects from the Eck Collection are characterised by a fine assemblage of Chimú blackware pottery from northern Peru, dating to c1050-1470AD. The capital city of the Chimú people was the largest pre-Columbian city in the Andes.  Chimú pottery was made in the shapes of animals, fruits and vegetables and mythical creatures and often depicts rich narrative scenes. High quality ceremonial Chimú ceramics were usually black.

In his catalogue Eck wrote: “These specimens fantastic & barbarous in their forms represent figures of animals formerly the objects of adoration among the Peruvians, and are supposed to be of a date long antecedent to the Spanish conquest. In common with many natives of Antiquity, the Peruvians paid great respect to their dead and always buried with them their household Gods and many articles of domestic use. Hence the many interesting reliquie of Antiquity found in these ancient receptacles of the dead & illustrating the Social and domestic habits of the Peruvians before the Spanish Conquest”.