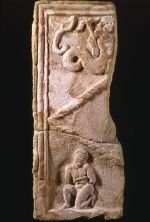 The Roman collection in the Hunterian Museum dates back to the late 17th century, when the third Marquis of Montrose presented a stone made by the Twentieth Legion, found at Old Kilpatrick at the western side of the Antonine Wall, to the Old College of the University of Glasgow.  This gift was followed, in the 17th and 18th centuries, by similar gifts from other landowners who found Roman stones on their property. Another early benefactor was the Canal Commission who donated stones found during the construction of the Forth and Clyde Canal.

The University published a volume of engravings of these stones called “Monumenta Romani imperii” containing thirty copperplate engravings of the stones, each plate incorporating the name of the donor, year of acquisition (where known) and measurements of the original stone. This volume is now held in Glasgow University Library Special Collections department.

By 1810, the University had transferred its Roman stones to the new Hunterian Museum, which had been opened in 1807, and which contained the collections bequeathed by William Hunter. These included his internationally famous collection of Roman coins, which is described elsewhere. Since the early years of the 20th century, the Roman collection has been expanded by the addition of material from excavations along the line of the Antonine Wall and from other Roman sites in Scotland.

The Legionary stones – “distance slabs” – found on the Antonine Wall record the length of wall completed by the various legions. Of the nineteen known, seventeen are in The Hunterian. This body of material is unique and nothing similar has been found on any other frontiers of the Roman Empire. The Latin inscriptions are often accompanied by scenes featuring the campaign successes of the Romans or the Legionary emblems, such as the wild boar of the Twentieth Legion. Other stones found on the line of the wall include tombstones and altars which give us important information about the people who manned, and interacted with, the Roman forts.

The finds from the excavations include objects made of stone, wood, metal, glass, pottery and leather. These help to give us a real insight into what life was like along the wall almost 2000 years ago. The large number of Roman objects found on native sites also demonstrates that there was a relationship between the men of the Roman army and the natives. Objects, such as the leather shoes, show the presence of women and children in the military zones.

The Hunterian Museum now holds the pre-eminent collection of Roman artefacts in Scotland, and the Antonine Wall became part of the Frontiers of the Roman Empire World Heritage Site in July 2008.