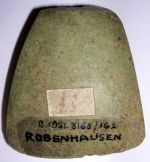 Swiss Neolithic lake dwellings have attracted great interest since the mid 19th century when wooden house posts were discovered in the exceptionally low water of Lake Zurich during the winter of 1853-4. Ferdinand Keller, president of the Antiquary Society in Zurich, envisioned houses on platforms over the lake. However, research has shown that it is more likely that houses were built on the edges of the lakes using a variety of different construction methods.

Swiss Neolithic lake dwellings were found around many of the bigger lakes in Switzerland and the exciting finds from the investigations of the 19th century attracted many collectors. The Hunterian’s material from Robenhausen comes from the collection of A. Henderson Bishop who, in his time, had one of the largest prehistoric collections in Scotland. Although mainly composed of Scottish material, just under 20% of the collection is from Europe with the Robenhausen material being an important part of this. Bishop presented his collection to the Hunterian Museum in 1951.

The site of Wetzikon-Robenhausen lies at the south end of Lake Pfäffikon, a lake in the canton of Zurich, in north-east Switzerland. The material from the site falls into four main sections: stone, bone and antler, textiles and vegetable samples. This assemblage has been described as among the best in the UK with an excellent range of organic materials. Research and analysis using modern techniques and methods allows a rare insight into the Neolithic way of life in northern Europe. The Hunterian assemblage is difficult to date as it does not contain any pottery, however its similarity to material from other sites suggests a date in the range c2700-1900BC.