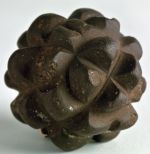 These are mysterious and uniquely Scottish objects. They are thought to date from the late Neolithic period, more than 4000 years ago. We do not know what they were for or how they functioned, although many different theories abound.

The Hunterian has 27 in its collection which, in common with the other 400+ known, are all relatively similar in size – about the size of a tennis ball fitting nicely into the hand. Most have raised round circular areas but some are more elaborate than others and some were coated; an example from Orkney was found to have been dyed with a black fish-based paste.

Due to most of the known examples being in good condition it is most likely that they functioned as ritual or prestige items which were carefully looked after and cherished for their rarity. They are very tactile objects which are nicely weighted and very pleasant to hold suggesting that this was an important aspect of their appeal in prehistoric times.