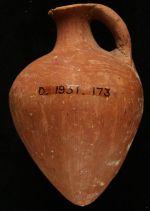 Professor John Garstang (1876-1956) directed excavations at Jericho, at Tell es-Sultan in Palestine, between 1930 and 1936 with a team of trained archaeologists and artefact specialists, helped by the local community. At first, Garstang’s excavations centred on the settlement mound, or Tell.  Remains were unearthed dating from the Neolithic period more than 3,000 years ago. There followed a systematic search for the burials of the people whose houses they had begun to uncover. In a cemetery west of the Tell, more than 30 tombs were excavated, all belonging to occupants of the Middle Bronze Age town (1950-1550BC). These tombs were either shaft/‘grotto’ tombs with underground chambers, or open tombs with large stones covering the burials. As the University of Glasgow part-sponsored his excavations the Hunterian Museum received a share of the artefacts.

The Hunterian also holds material from Jericho from the excavations of Kathleen Kenyon This entire corpus of material is now being re-evaluated in a postgraduate study, co-ordinated by Università di Roma "La Sapienza", which aims to unify all data from the site as a resource for the Palestinian Department of Antiquities and Cultural Heritage (DACH).